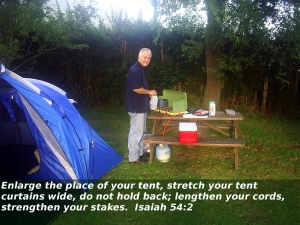 Have you ever gone on a holiday with no money?  We have!  We were forced to some years back, through having to vacate our student flat on campus over the December-January holiday period.  As far as our finances went, we were running on the smell of an oily rag.

We prayed about what to do and where to go before leaving, and God didn’t disappoint us.  “Enlarge the place of your tent, stretch your tent curtains wide, do not hold back; lengthen your cords, strengthen your stakes” He said.  It seemed a great idea.  Off we went with $80, a $1000 overdraft, a tent and a 16 year old car.

In the end, we spent only three days camping.  We got houses to sit in big city Auckland and in Waipawa, a friendly little town in Hawkes Bay.

We went camping at a place called “Te Aroha” which means “the mountain of love” or “the loved one”.  The river its next to is the Waihou river, meaning “new water.”  One of the walks we did took us along the banks of the Waihou river.  It’s a river of crystal clear water, which I’ve covered in earlier posts:

Come to the river and Salus per Aquam, Healing through waters.

New Zealand is a country of outstanding natural beauty, so we went exploring.  We spent several days in the Karangahake Gorge, an old gold mining area of bush clad gorges, waterfalls and sparkling rivers.

If you are ever in the North Island of New Zealand, I recommend these places for hiking.

From there, we eventually made our way to Hawkes Bay, where we were going to house-sit for my sister and brother-in-law.  The road we travelled was the Napier-Taupo road.

The road isn’t as bad as when I was a kid, but I was a bit worried because there were some big hills for the old car to get over.  The Australians call our hills “mountains”.  My worst fears were realised after we scaled the Gentle Annie, a hill that was over 2300 feet high.  The car engine overheated and converted all the water to steam at the summit.  It still went after that, but it was flaky and never the same for the rest of the holiday.

We had to spend some of the overdraft money on products to try and fix the subsequent overheating and leaking problems.  I think the hill lead to the engine’s demise.  Six months later, my husband replaced the engine as soon as we were able to afford it.

I felt the presence of God on that holiday, especially in Hawkes Bay.  He spoke to me a lot out of the book of Isaiah, even though I was reading Proverbs at the time.  That holiday has to be one of my all time best holidays, even though we had no money and a car with overheating problems.  I believe it is better to be time-rich and money-poor rather than the other way around.  Experiences don’t have to cost money, but you need to have the time to enjoy them.  Joy is part of the word ‘enjoy’.  That holiday, I learned what joy was.