“We worship the same God,” he replied, wanting peace between us. 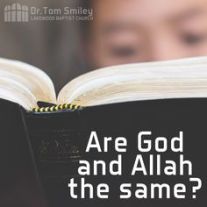 Really?  I heard the same thing from my new age publishing consultant.  She believed the market would be fine with my story as “any deity could play the King.”

“You mean, Jesus could be the same as Allah?” I asked the publishing consultant, to clarify.

“Well, yes – as the Bible and the Quran contain many of the same elements” she replied.

It is true that Islam’s warlike prophet Mohammed did include parts of the Bible in the Quran.  The Gospels had been around at least 500 years before Islam.

But both books can’t be right.  I made it quite clear before publishing the book that I would not change the name of the King or dilute his persona or character – not for anybody.  He is who he is.

“What is truth?” Pilate asked.

These are the questions we all have to decide.  I only hope my book “The Kingdom, Here Be Dragons, Here Be Dreams” presents the King as he is in the Bible; the King eternal, immortal, invisible, the only God. 1 Timothy 1:17

For Ishmael’s sake, I did try to read the Quran years ago.  I got through a good part of it before stopping at the part which advocated killing Jews and infidels.  There are over a hundred verses in the Quran dealing with Jihad or holy war.  That’s why we’re having so many problems with terrorism, which would be better named “Muslim fundamentalism.”

At his arrest, Jesus, the King in my story, told Peter “Put away your sword, for those who live by the sword will die by the sword.”  Matthew 26:52.

Jesus fought with a different sword – the word out of his mouth.

After praying for wisdom, I tried a different tack with Ishmael.  I looked at who Jesus, Isa is in the Quran.  Much to my surprise, in the Quran Jesus is called “Spirit of God” and “Word of God.”  And he is mentioned more in the Quran than Mohammed, their prophet.

But it’s like the truth is veiled from Ishmael.  His religion is designed to keep them away from Christ.  Knowing that only the true God can remove the veil.  I presented Jesus, Isa to him as the “Spirit of God.”  I can remember Ishmael referring to Jesus as such.

This poem is for Ishmael.  Although we are related through Abraham, peace cannot come through compromise.  To agree that God and Allah are the same is to break the first commandment, which says;  “I am the Lord your God, who brought you out of Egypt, out of the land of slavery.  “You shall have no other gods before me.”  Exodus 20:1-3

God is fussy about His name.

Islam has 99 names for God and they don’t match up.

How Muhammad Broke the 10 Commandments – #1 I am the Lord thy God
Jesus is “‘the stone you builders rejected, which has become the cornerstone.’  Salvation is found in no one else, for there is no other name under heaven given to mankind by which we must be saved.”  Acts 4:11-12