This week a priest visited the churches in my small community, along with the elders of the Assyrian Church of NZ.  His name was Father Fadi.  He needed an interpreter as he did not speak English, he spoke Aramaic – the language of Jesus.  He was dressed in a black hassock with a black and silver skufia (soft cloth cap).  Why was he so far away from his homeland?

Father Fadi was forced to leave Iraq.  His wife and children are still there.

I had never before seen a member of the persecuted church, and we all listened to him very carefully.  He carried the hurt of his people.

Realising we were in the presence of an ancient church, one that had been persecuted for centuries, a reverential hush came over us.

It reminded me of the hush I witnessed when a church was moved on a barge from Snells Beach back to Matakana, it’s original community.  The waiting crowd had gone silent when the little church appeared around the final bend of the Matakana river.

This is also a church on the move, but there is no home for it.  Mosul (Ninevah) is a Christian area, always has been.  Father Fadi said things got progressively worse for them in Iraq after Sadam Hussein was deposed, especially since 2010.  He said that every day his heart had pain.

There were over 100,000 Christians living on the plains of Ninevah.  Isis forced the people out.  They had to leave their homes overnight and and have nowhere to go.  Some of them are sheltering under highway underpasses and the temperature has got up to 50 degrees C.

Father Fadi said that he wanted us to know that there was a church in Iraq.  St Matthews was his monastery.  It was founded in the 3rd century.  Its 20kms from Mosul, ancient Ninevah.  Now there are only two elderly monks left at St Matthews who did not want to abandon the monastery.

Please pray for them.  What does God think of their plight?  Why has He been silent in the face of the slander, abuse and murder of His people?

For the past two weeks, I’ve been getting a verse from Amos;

The lion has roared—who will not fear?
The Sovereign Lord has spoken—who can but prophesy? Amos 3:8.

I’ve been praying for a context.  Today He told me the Lord is a God who avenges, and one of His names is “The avenger of blood.”

We’re not used to that concept.  All we know is a God who has taught us forgiveness 70 x 7.  We know the Lamb, not the Lion.

It’s time for the church to rise up and pray.  There is a time for peace, and a time for war.  The church couldn’t stand by and turn the other cheek while Hitler was rampaging through Europe and North Africa.  In that time, God raised up intercessors like Rees Howells.  We need to intercede like that again.

What can we pray?

It can be hard to pray about the enemy.  I mean, I’d love to ask God to slaughter the Jihadists and leave their dead bodies strewn across the desert.  It would be justice, but then I’d be praying for them to go to hell.  A better prayer would be for God to thwart them, or make Himself known to them in dreams.  If you don’t know what to pray, pray the word.  Psalms are good for this purpose.  God delights in us addressing Him using His word, and it never returns void.  The devil can’t stop prayer from the word.  I used this I used the world from Psalm 94 to pray for His persecuted people; 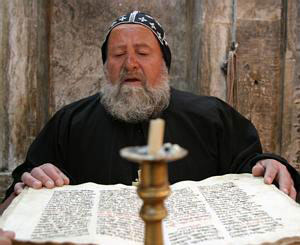 O God who avenges, shine forth.
Rise up, Judge of the earth;
pay back to the proud what they deserve.
How long, Lord will the wicked, how long will the wicked be jubilant?
They pour out arrogant words;
They crush your people,they oppress your inheritance.
They slay the widow and the foreigner;
they murder the fatherless.
They say, “The Lord does not see; the God of Jacob takes no notice.”
The wicked band together against the righteous
and condemn the innocent to death.
Lord let the enemy know you do see,
Let the enemy see you are taking notice.
Let them see the futility of their arrogant words and empty boasts,
That they may come to fear you.
Lord protect the widow, the foreigner, the fatherless.
Become the fortress of your persecuted people,
the rock in whom they can take refuge.  Amen.

There’s a lot more to the Psalm than I’ve prayed here.  I recommend you read the whole Psalm.  I will write more about the Lion of God in the next post.

The Lord’s Prayer in the Language of Jesus